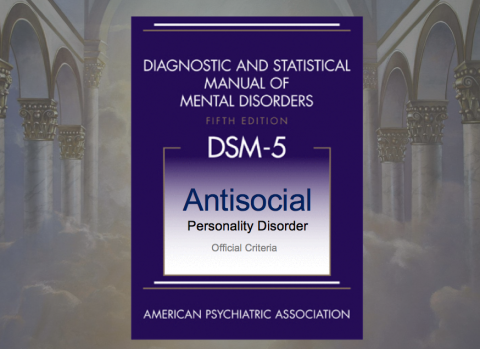 A. A pervasive pattern of disregard for and violation of the rights of others, occurring since age 15 years, as indicated by three (or more) of the following:

1. Failure to conform to social norms with respect to lawful behaviors, as indicated by repeatedly performing acts that are grounds for arrest.

2. Deceitfulness, as indicated by repeated lying, use of aliases, or conning others for personal profit or pleasure.

3. Impulsivity or failure to plan ahead.

4. Irritability and aggressiveness, as indicated by repeated physical fights or assaults.

5. Reckless disregard for safety of self or others.

7. Lack of remorse, as indicated by being indifferent to or rationalizing having hurt, mistreated, or stolen from another.

B. The individual is at least age 18 years.

C. There is evidence of conduct disorder with onset before age 15 years.

D. The occurrence of antisocial behavior is not exclusively during the course of schizophrenia or bipolar disorder.

For this diagnosis to be given, the individual must be at least age 18 years (Criterion B) and must have had a history of some symptoms of conduct disorder before age 15 years (Criterion C). Conduct disorder involves a repetitive and persistent pattern of behavior in which the basic rights of others or major age-appropriate societal norms or rules are violated. The specific behaviors characteristic of conduct disorder fall into one of four categories: aggression to people and animals, destruction of property, deceitfulness or theft, or serious violation of rules.

The pattern of antisocial behavior continues into adulthood. Individuals with antisocial personality disorder fail to conform to social norms with respect to lawful behavior (Criterion Al). They may repeatedly perform acts that are grounds for arrest (whether they are arrested or not), such as destroying property, harassing others, stealing, or pursuing illegal occupations. Persons with this disorder disregard the wishes, rights, or feelings of others. They are frequently deceitful and manipulative in order to gain personal profit or pleasure (e.g., to obtain money, sex, or power) (Criterion A2). They may repeatedly lie, use an alias, con others, or malinger. A pattern of impulsivity may be manifested by a failure to plan ahead (Criterion A3). Decisions are made on the spur of the moment, without forethought and without consideration for the consequences to self or others; this may lead to sudden changes of jobs, residences, or relationships. Individuals with antisocial personality disorder tend to be irritable and aggressive and may repeatedly get into physical fights or commit acts of physical assault (including spouse beating or child beating) (Criterion A4). (Aggressive acts that are required to defend oneself or someone else are not considered to be evidence for this item.) These individuals also display a reckless disregard for the safety of themselves or others (Criterion A5). This may be evidenced in their driving behavior (i.e., recurrent speeding, driving while intoxicated, multiple accidents). They may engage in sexual behavior or substance use that has a high risk for harmful consequences. They may neglect or fail to care for a child in a way that puts the child in danger.

Individuals with antisocial personality disorder also tend to be consistently and extremely irresponsible (Criterion A6). Irresponsible work behavior may be indicated by significant periods of unemployment despite available job opportunities, or by abandonment of several jobs without a realistic plan for getting another job. There may also be a pattern of repeated absences from work that are not explained by illness either in themselves or in their family. Financial irresponsibility is indicated by acts such as defaulting on debts, failing to provide child support, or failing to support other dependents on a regular basis. Individuals with antisocial personality disorder show little remorse for the consequences of their acts (Criterion A7). They may be indifferent to, or provide a superficial rationalization for, having hurt, mistreated, or stolen from someone (e.g., 'Life's unfair," "losers deserve to lose"). These individuals may blame the victims for being foolish, helpless, or deserving their fate (e.g., "he had it coming anyway"); they may minimize the harmful consequences of their actions; or they may simply indicate complete indifference. They generally fail to compensate or make amends for their behavior. They may believe that everyone is out to "help number one" and that one should stop at nothing to avoid being pushed around.

The antisocial behavior must not occur exclusively during the course of schizophrenia or bipolar disorder (Criterion D).

Individuals with antisocial personality disorder frequently lack empathy and tend to be callous, cynical, and contemptuous of the feelings, rights, and sufferings of others. They may have an inflated and arrogant self-appraisal (e.g., feel that ordinary work is beneath them or lack a realistic concern about their current problems or their future) and may be excessively opinionated, self-assured, or cocky. They may display a glib, superficial charm and can be quite voluble and verbally facile (e.g., using technical terms or jargon that might impress someone who is unfamiliar with the topic). Lack of empathy, inflated self appraisal, and superficial charm are features that have been commonly included in traditional conceptions of psychopathy that may be particularly distinguishing of the disorder and more predictive of recidivism in prison or forensic settings, where criminal, delinquent, or aggressive acts are likely to be nonspecific. These individuals may also be irresponsible and exploitative in their sexual relationships. They may have a history of many<br>sexual partners and may never have sustained a monogamous relationship. They may be irresponsible as parents, as evidenced by malnutrition of a child, an illness in the child resulting from a \aèk of minimal hygiene, a child's dependence on neighbors or nonresident relatives for food or shelter, a failure to arrange for a caretaker for a young child when the individual is away from home, or repeated squandering of money required for household necessities. These individuals may receive dishonorable discharges from the armed services, may fail to be self-supporting, may become impoverished or even homeless, or may spend many years in penal institutions. Individuals with antisocial personality disorder are more likely than people in the general population to die prematurely by violent means (e.g., suicide, accidents, homicides).

Twelve-month prevalence rates of antisocial personality disorder, using criteria from previous DSMs, are between 0.2% and 3.3%. The highest prevalence of antisocial personality disorder (greater than 70%) is among most severe samples of males with alcohol use disorder and from substance abuse clinics, prisons, or other forensic settings. Prevalence is higher in samples affected by adverse socioeconomic (i.e., poverty) or sociocultural (i.e., migration) factors.

Antisocial personality disorder has a chronic course but may become less evident or remit as the individual grows older, particularly by the fourth decade of life. Although this remission tends to be particularly evident with respect to engaging in criminal behavior, there is likely to be a decrease in the full spectrum of antisocial behaviors and substance use. By definition, antisocial personality cannot be diagnosed before age 18 years.

Antisocial personality disorder appears to be associated with low socioeconomic status and urban settings. Concerns have been raised that the diagnosis may at times be misapplied to individuals in settings in which seemingly antisocial behavior may be part of a protective survival strategy. In assessing antisocial traits, it is helpful for the clinician to consider the social and economic context in which the behaviors occur.