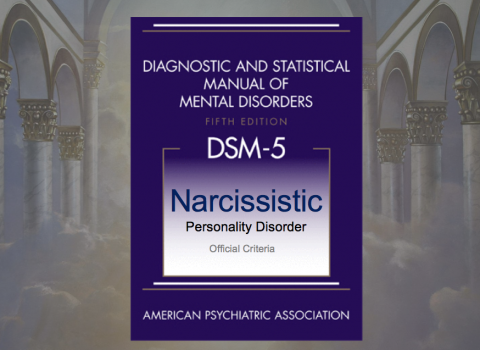 A pervasive pattern of grandiosity (in fantasy or behavior), need for admiration, and lack of empathy, beginning by early adulthood and present in a variety of contexts, as indicated by five (or more) of the following:

The essential feature of narcissistic personality disorder is a pervasive pattern of grandiosity, need for admiration, and lack of empathy that begins by early adulthood and is present in a variety of contexts.

Individuals with this disorder have a grandiose sense of self-importance (Criterion 1). They routinely overestimate their abilities and inflate their accomplishments, often appearing boastful and pretentious. They may blithely assume that others attribute the same value to their efforts and may be surprised when the praise they expect and feel they deserve is not forthcoming. Often implicit in the inflated judgments of their own accomplishments is an underestimation (devaluation) of the contributions of others. Individuals with narcissistic personality disorder are often preoccupied with fantasies of unlimited success, power, brilliance, beauty, or ideal love (Criterion 2). They may ruminate about "'long overdue" admiration and privilege and compare themselves favorably with famous or privileged people.

Individuals with narcissistic personality disorder believe that they are superior, special, or unique and expect others to recognize them as such (Criterion 3). They may feel that they can only be understood by, and should only associate with, other people who are special or of high status and may attribute "unique," "perfect," or "gifted" qualities to those with whom they associate. Individuals with this disorder believe that their needs are special and beyond the ken of ordinary people. Their own self-esteem is enhanced (i.e., "mirrored") by the idealized value that they assign to those with whom they associate. They are likely to insist on having only the "top" person (doctor, lawyer, hairdresser, instructor) or being affiliated with the "best" institutions but may devalue the credentials of those who disappoint them.

Individuals with this disorder generally require excessive admiration (Criterion 4). Their self-esteem is almost invariably very fragile. They may be preoccupied with how well they are doing and how favorably they are regarded by others. This often takes the form of a need for constant attention and admiration. They may expect their arrival to be greeted with great fanfare and are astonished if others do not covet their possessions. They may constantly fish for compliments, often with great charm. A sense of entitlement is evident in these individuals' unreasonable expectation of especially favorable treatment (Criterion 5). They expect to be catered to and are puzzled or furious when this does not happen. For example, they may assume that they do not have to wait in line and that their priorities are so important that others should defer to them, and then get irritated when others fail to assist "in their very important work." This sense of entitlement, combined with a lack of sensitivity to the wants and needs of others, may result in the conscious or unwitting exploitation of others (Criterion 6). They expect to be given whatever they want or feel they need, no matter what it might mean to others. For example, these individuals may expect great dedication from others and may overwork them without regard for the impact on their lives. They tend to form friendships or romantic relationships only if the other person seems likely to advance their purposes or otherwise enhance their self-esteem. They often use special privileges and extra resources that they believe they deserve because they are so special.

Individuals with narcissistic personality disorder generally have a lack of empathy and have difficulty recognizing the desires, subjective experiences, and feelings of others (Criterion 7). They may assume that others are totally concerned about their welfare. They tend to discuss their own concerns in inappropriate and lengthy detail, while failing to recognize that others also have feelings and needs. They are often contemptuous and impatient with others who talk about their own problems and concerns. These individuals may be oblivious to the hurt their remarks may inflict (e.g., exuberantly telling a former lover that "I am now in the relationship of a lifetime!"; boasting of health in front of someone who is sick). When recognized, the needs, desires, or feelings of others are likely to be viewed disparagingly as signs of weakness or vulnerability. Those who relate to individuals with narcissistic personality disorder typically find an emotional coldness and lack of reciprocal interest.

These individuals are often envious of others or believe that others are envious of them (Criterion 8). They may begrudge others their successes or possessions, feeling that they better deserve those achievements, admiration, or privileges. They may harshly devalue the contributions of others, particularly when those individuals have received acknowledgment or praise for their accomplishments. Arrogant, haughty behaviors characterize these individuals; they often display snobbish, disdainful, or patronizing attitudes (Criterion 9). For example, an individual with this disorder may complain about a clumsy waiter's "rudeness" or "stupidity" or conclude a medical evaluation with a condescending evaluation of the physician.

Vulnerability in self-esteem makes individuals with narcissistic personality disorder very sensitive to "injury" from criticism or defeat. Although they may not show it outwardly, criticism may haunt these individuals and may leave them feeling humiliated, degraded, hollow, and empty. They may react with disdain, rage, or defiant counterattack. Such experiences often lead to social withdrawal or an appearance of humility that may mask and protect the grandiosity. Interpersonal relations are typically impaired because of problems derived from entitlement, the need for admiration, and the relative disregard for the sensitivities of others. Though overweening ambition and confidence may lead to high achievement, performance may be disrupted because of intolerance of criticism or defeat. Sometimes vocational functioning can be very low, reflecting an unwillingness to take a risk in competitive or other situations in which defeat is possible. Sustained feelings of shame or humiliation and the attendant self-criticism may be associated with social withdrawal, depressed mood, and persistent depressive disorder (dysthymia) or major depressive disorder. In contrast, sustained periods of grandiosity may be associated with a hypomanie mood. Narcissistic personality disorder is also associated with anorexia nervosa and substance use disorders (especially related to cocaine). Histrionic, borderline, antisocial, and paranoid personality disorders may be associated with narcissistic personality disorder.

Prevalence estimates for narcissistic personality disorder, based on DSM-IV definitions, range from 0% to 6.2% in community samples.

Of those diagnosed with narcissistic personality disorder, 50%-75% are male.

Many highly successful individuals display personality traits that might be considered narcissistic. Only when these traits are inflexible, maladaptive, and persisting and cause significant functional impairment or subjective distress do they constitute narcissistic personality disorder.

Grandiosity may emerge as part of manic or hypomanic episodes, but the association with mood change or functional impairments helps distinguish these episodes from narcissistic personality disorder.

Narcissistic personality disorder must also be distinguished from symptoms that may develop in association with persistent substance use.